The Mishna says that the circumference of a circle is 3 times its diameter. The gemara asks how we know that and learns it out from the Yam Shel Shlomo which was a very large mikvah that contained the amount of 150 mikvaos of 40 se'ah. When the pesukim describe the yam shel shlomo, it describes its circumference to be 3 times its diameter.
Rav Shlomo Vilna (Cheishek Shlomo) in the back of the gemara asks, why does the gemara need to figure out the mathematical ratio of circumference to diameter using the yam shel shlomo. This is something that can be easily measured and figured out?

He explains that in truth this number is not precise. As Tosafos points out the mathematicians assume that the circumference is slightly more than 3 times the diameter. The Rambam in the pirush hamishna also says that the circumference is 3 and 1/7 of the diameter (3.14285) recognizing that the number is imprecise.
Actual number is 3.14159265359.
Based on this, the R. Shlomo Vilna explains that the gemara is looking for a source that it is sufficient to use imprecise measurements of pie in calculating the diameter (at least in reference to a korah on a mavuy). From the fact that the pesukim themselves assume the inaccurate ratio of diameter to circumference to be 1:3, we can surely rely on that l'halacha and not have to over compensate for the extra 1/7.
Posted by Avi Lebowitz at 4:43 PM 1 comment:

Eiruvin 9b - Mechitzos Visible Only From Outside

Below I am attaching a copy of Rav Hershel Schachters sefer, bikvei hatzon where he develops a very mechudash approach to the concept of siluk mechitzos. Simply, all it means in the gemara 92b is that when mechitzos are hidden by other mechitzos such as the pink line in tziyur 2 that extend the walls of the chatzer ketana hiding the gefufei (extension walls) of the larger court yard, it would be forbidden to carry even in the larger courtyard. Similarly in tziyur 1, without the side walls of the house, the front wall of the house could have been considered a mechitza to allow carrying in the driveway, but the construction of these walls blocks off the wall of the house.

After re-reading Rav Hershel's shtikel and discussing it with my chavrusa, I think I understand his point. Rav Hershel says that in a tziyur like the one below, we don't allow the outer walls of the house A-B-C to be the wall of the eiruv. 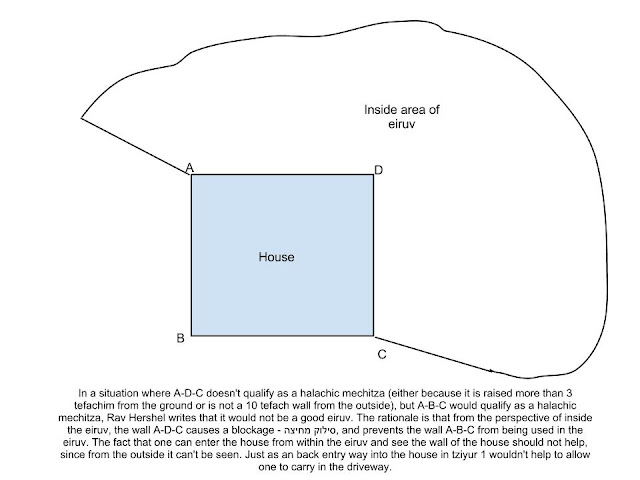 Posted by Avi Lebowitz at 3:32 PM No comments:

The gemara explains that the braisa that considers grabbing the stringent opinions to be foolish - כסיל בחשך הולך, only applies when there is an inherent contradiction between them. The example given is the halachos of tu'mah and treifa that result from the machlokes whether a spine missing a vertebrae is considered complete. The opinion who considers it complete is a stringency of tu'mah but a leniency of treifa, the opinion  who considers it incomplete is a stringency of treifa and a leniency of tu'mah. To be lenient in both would be a רשע and to be strict in both would be a fool. Although the gemara says that R. Akiva was machmir for both opinions regarding when the new year begins for ma'aser, that is because he was trying to follow Beis Hillel, just he wasn't sure what B"H held.
Perhaps a practical example of this would be the famous argument between R. Chaim Na'eh and the Chazon Ish regarding shiurei torah. The CI was notorious for having large shiurim, whereas RCN has smaller shiurim. In the context of creating a wall, the CI would be the stringent opinion, but in the context of a breach in the wall the CI would be the lenient opinion by holding of a very large amah. An eiruv that is constructed based on the shiurim of the CI for walls and machmir for RCN by breaches would seemingly be a prime example of כסיל בחשך הולך. It would seem that this is even worse than the case of the gemara. In the case of the gemara, at the time he is being machmir by treifa, he isn't being machmir by tu'mah, and days or weeks later when he is machmir by tu'mah he isn't being machmir by treifa, so that each even independently is acceptable. Yet, the gemara considers him to be a כסיל בחשך הולך. Certainly in a circumstance where the entire eiruv is built on the two stringent opinions being used simultaneously, it would be considered a כסיל בחשך הולך.
One of the members of our kollel suggested that the case of an eiruv might be different because it is being built to be used by a community. Although for an individual to be machmir for both opinions and certainly to construct an eiruv based on both opinions, would be a foolish practice, but a community may be different. Within the community there are those who hold like RCN and those who hold like the CI, therefore it would seem acceptable to construct an eiruv so that both those who hold like RCN and those who hold like the CI are able to carry. However, someone else pointed out that the case in the gemara where they were machmir by the mavuy akum for both rav and shmuel was also a case of a public eiruv for a mavuy, yet the implication is that only because there isn't an inherent contradiction between the two opinions was it acceptable. The gemara implies that had the opinion of Rav been an inherent contradiction to Shmuel, the eiruv would not have been constructed in that way. But in truth, there is no proof from the gemara. In the case of the gemara, had there been a contradiction between the opinions, it would not be possible for one to hold that the bent part needs to be fixed and say that it needs a door. Therefore, those who hold like Rav would hold that it doesn't need a door (just a tzuras hapesach) and those who hold like shmuel would hold that it doesn't need anything.
It seems to me that the entire concept of כסיל בחשך הולך only applies when one is trying to be machmir for both of the two opinions. However, if one would have their own halachic opinion, but be unsure as to the precise size of an amah thereby leading to a gray area in which they need to be machmir, that would no qualify as a כסיל בחשך הולך. For example, if one would be machmir for the opinion who says כדי אכילת פרס is 3 minutes for matzah, but on Y.K. be machmir for the opinion who says 9 minutes, he would be a fool. But if the reason he is machmir is because he himself is me'supak about the shiur and the entire span from 3 to 9 minutes is a safeik to him, he would be entitled to be machmir and not be considered a fool.
Posted by Avi Lebowitz at 4:03 PM No comments:

Eiruvin 6a - Entry Way in a Corner

The gemara says that although we allow a breach in the side wall (or even front wall) of a mavuy to be as large as 10 amos without having to fix it, it must be in the actual wall, not in the corner. The language that the gemara uses is פתחא בקרן זוית לא עבדי אינשי. It isn't normal for one to make an entry way in a corner, therefore we don't automatically consider an entry way in the corner to be a pe'sach just because it is 10 amos or less. However, Tosafos says that if one constructs a Tzuras HaPesach which indicates that he does intend to use it as a pe'sach, that is sufficient. Tosafos holds that we don't automatically validate the type of breach that catty corners a square area, but a tzuras hapesach is a valid indication that one intends to use it as a pe'sach. The Rashba, although he agrees with Tosafos, cites that both the Rif in the name of Rabbeinu Hai and the Rambam disagree. They maintain that even a tzuras hapesach would not work if it is in a corner. Furthermore, the Rambam (Hil. Shabbos 16:20) holds that even if it doesn't quite catty corner the square area on the diagonal, rather it is a pe'sach that is made near the corner (i.e. the pesach is made in the North-West corner but is fully on the western side without eating up any of the northern wall), it is considered a פתח בקרן זוית and would not be valid, even with a tzuras hapesach. The halacha is like Tosafos, not like the Rambam. Another point is that when the breach is in the front of a mavuy, such as picture 1 below, and people use that opening to enter and exit, it is considered בקעי בה רבים and therefore must be less than 4 tefachim wide. The M.B. 365:10 discusses that idea that we may need to be machmir for city eriuvin that they have the stringencies of a מבוי. Therefore, picture 1 would be a problem even if we don't consider it to be a פתח בקרן זוית.

Posted by Avi Lebowitz at 3:22 PM No comments:

Shabbos 156a - Summary of Laws of Lisha (kneading)

Posted by Avi Lebowitz at 2:27 PM No comments: